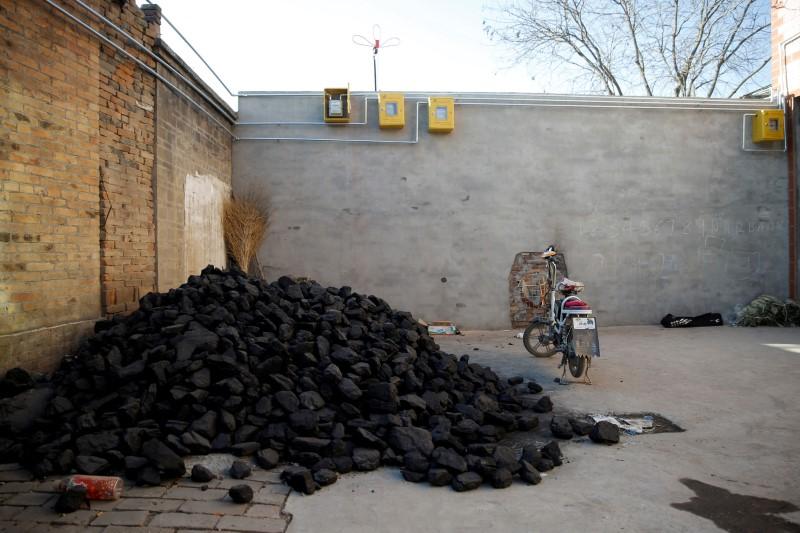 A pile of coal is seen underneath newly installed gas pipes in a courtyard in the village of Heqiaoxiang outside of Baoding, Hebei province, China, December 5, 2017.
Picture: Thomas Peter/taken December 5, 2017/REUTERS

China is in the fifth year of a “war on pollution” aimed at reversing the damage done to the country’s environment since the economy was opened up in 1978, with President Xi Jinping promising to use the full might of the Chinese Communist Party to meet the country’s goals.

The new 2018 to 2020 action plan, released on the country’s official government website, will expand the fight to 82 cities across China, and confirmed that the major coal-producing provinces of Shanxi and Shaanxi have been added to the list of “key” pollution control regions.

The new plan will also cover the heavily industrialized province of Henan in central China, as well as the Yangtze river delta, which includes the provinces of Anhui, Zhejiang, Jiangsu and the region around Shanghai.

It also said no new capacity for steel, coke and primary aluminum production will be allowed in the regions through to 2020, the State Council, or China’s cabinet, said. It will cap steel capacity in Hebei, the country’s largest steelmaking province, at 200 million tonnes by 2020, down from 286 million tonnes in 2013.

China will also take more action to tackle small-scale “scattered” pollution sources, and will work to cut off water, electricity and raw material supplies to firms that violate rules.

To meet its politically important smog targets in northern China last year, the government curbed traffic and coal use, and also imposed “one size fits all” restrictions on industries like steel, aluminum and cement throughout 28 northern cities from October 2017 to March this year.

The cabinet said special anti-smog measures would still be introduced over autumn and winter, but each of the 82 cities would now draw up its own bespoke plan. It also said it would raise gas storage capacity to ensure supplies were sufficient during winter.

The cabinet also set an annual production and sales target for new energy vehicles at around 2 million vehicles a year by 2020 in order to reduce road emissions.